A boat’s handling characteristics are affected by wind and current, no matter what type of hull and power combination it has. Keeping a course or maneuvering in close quarters may be straightforward on a calm day during a slack tidal current, but the boat may become quite ill-mannered when coping with a stiff crosswind or crosscurrent. Since bows on many power boats are higher than the sterns, they tend to fall off the wind when backing, despite anything that is done with the helm. So, in general, when operating a boat in large waves and high winds, head into the waves at a slight angle, and reduce your speed. This will help you maintain control, and avoid falling off of a wave, or having a wave break over your stern.

Hull type has the most effect on how a boat reacts to the current. Displacement-type hulls with considerable draft are affected by current to a greater extent than shallower-draft, lighter, planing-type hulls. Water is much denser than air, so a half-knot cross current may have more effect on a displacement cruiser than a stiff 15 to 20 knot wind.

On the other hand, given the same conditions, a planing - type hull with a high tuna tower could be more affected by wind than by current. Neither a displacement nor planing boat can ignore the wind current. Skippers of both will find one of them a major factor affecting the boat’s maneuverability. This becomes most apparent while running at low speed in close quarters.

Large ocean undulations, generated by distant storms and unrelated to local causes, are called swells. The surface of a swell may be perfectly calm, but it is usually textured by the wind into groups of tiny ripples called "catspaws". The ripples gradually build into waves.

As the waves travel quickly over a long fetch, the distance free of obstructions, each crest reaches higher above its trough. Increasing wind tears at the wave tops, revealing whitecaps and throwing off spume. When this heavy sea encounters shallow water, its energy can no longer be absorbed by the circular movement of water within each wave. The crests rise and break. Surf crashes ashore.

The same sea, meeting a current, will rear up, creating a rip, sometimes amplified by the narrowing funnel of an inlet. Over long fetches of shallow water, strong winds may create waves of moderate height, but with a viciously steep and short chop- which is even more dangerous than ocean waves of greater size. Lake Erie and Delaware Bay, for example, are two bodies of water renowned for choppy conditions.

Both coastal and inland boaters are familiar with currents, the horizontal flow of water in a downstream direction. Currents are also found in open water where they range from huge, persistent ocean movements, such as the Gulf Stream or the California Current, to the strong but short-lived undertow, or rip current, of a beach where surf finds its way back offshore.

Ocean, lake and river currents respond to the push of prevailing winds. In addition, ocean currents are affected by variations in water density resulting from different levels of salinity and temperatures.

The largest currents are part of the world’s five gyres- giant circular oceanic currents. There are two gyres in the Northern Hemisphere that travels in a clockwise direction: one circling the North Atlantic; the other, the North Pacific. Three gyres in the Southern Hemisphere circle the South Atlantic, the South Pacific and the Indian Ocean in a counterclockwise direction. While the gyres are surface currents, there are other equally important countervailing deep currents.

Regular, intermittent currents that respond to movement of the sun and moon are called tidal currents. Tides are the actual rise and fall in local water level as tidal currents force masses of water alternately against and away from shore. Incoming tidal currents flood, then ebb as they retreat.The strongest are associated with spring tides during new and full moons, when the moon and sun pull in parallel directions. Tide currents flow more gently as neap tides that occur at the quarter moon.

Every current, regardless of its origin, has a set and a drift (speed). Set is the true direction toward which a current flows; drift is its speed. The speed of tidal currents and the height of the tides are so important to coastal navigation that annual tide tables and tidal current tables are published under government supervision.

Depending upon the bodies of water on which you boat, tides can have a major impact on your boating experience. Watch the tide charts or listen to tide reports in your area before you go boating. Going aground is never a good time.

Some channels and inlets can be very dangerous when the tide is running, and knowing when and when not to enter the channel can make your boating trip a disaster, or an enjoyable trip.

Most commercial radio and television stations give marine weather broadcasts during the boating season, with updates several times a day. Other sources of weather information include NOAA, the National Weather Service, and other government agencies.

Scan the Airwaves and the Horizon

On the water, the best way to receive timely weather information is by radio. NOAA Weather Radio provides continuous weather programming for most boating areas on your VHF radio. For other weather broadcasts and their frequencies, see the chart below.

Although sportsmen may have better luck on cloudy or windy days, being out in a boat in bad weather can be very risky. High winds, rough water and thunderstorms can suddenly turn a pleasant outing into a frightening experience.

When you go out on your boat, you should know the current forecast, and have a way to receive warnings and weather advisories while underway. Making boating safety your first priority is the best way to ensure you will be back again next sporting season.

Even with today's high-tech weather forecasts and radios, there's no substitute for the time-honored practice of scanning the horizon for changes in the wind, waves, water, and sky that signal developing weather patterns. 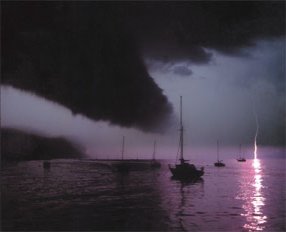 It swells into mounds of thick, billowy cumulous clouds that quickly darken into the towering ominous-looking cumulonimbus clouds characteristic of thunderstorms.

Consider the formation of this thick, dark cloud an unmistakable thunderstorm warning, and head immediately for a safe anchorage. The transition from a small cloud into a turbulent, electrified storm front can occur in as little as 30 minutes. The barometer will drop quickly and strong, gusty winds and heavy rains with thunder and lightning will soon follow. Fortunately, few squalls last more than an hour.

The sharper, darker and lower the front edge of the cloud, the more severe the storm. The anvil-shaped top of the storm cloud points in the direction that the storm is traveling.

In summer, afternoon thunderstorms are likely to occur over water when the humidity and temperature ashore are high. Hot air radiates upward from land surfaces heated by the sun. Moisture from a nearby body of water is absorbed by the warm air, which rises to begin the formation of thunderheads.

They usually appear as swift-moving black clouds, often approaching from the northwest southwest, south or west at speeds of 25-35 knots.

You can determine the distance of an approaching thunderstorm by counting the number of seconds between the lightning flash and the thunder clap, and dividing by five.

That will give you the distance in miles you are from the storm. For example, if the time lapse between the lightning flash and the thunder clap is 10 seconds, divide by 5. The storm is approximately 2 miles away from you.

Another handy tip that a thunderstorm is near is to tune your radio to any AM station. Thunderstorms will create static crackling on a station that would otherwise sound clear.

If a Thunderstorm is Approaching You

Once the Storm Hits

The best protection against lightning is avoidance. Lightning is random, unpredictable and very dangerous. Here are some tips to help you avoid lightning while on the water.

For a few first hand accounts of what can happen in a thunder storm, go to the BoatU.S. Insurance Magazine website.

For information on lightning protection, call the Coast Guard InfoLine at 1-800-368-5647, or contact: