For many boaters, exploring different cruising grounds means towing a boat to a new lake or river. Many times, both sides of the shore are visible, and navigation consists of locating a familiar landmark.

Sounds easy, right? Think again, as inland cruising has many different rules for operating your boat, and many hazards that you might not be aware of without the "local" knowledge of the water. So how do you get that information?

Before you go out on any body of water, you should try and get a chart. This will give you a good idea of areas to stay away from. More accurate information should be obtained by looking at local boating or fishing guides, the USCG "Notice to Mariners", and most importantly, you should talk with local boaters. Talking with people at the bait shop, the launch ramp, or the marina will help you find out the information that you won't get on a chart - how the current is running after the rains, how low the water is because of the drought, etc.

In the following text we will discuss common waters that people boat on, and common hazards that are found on those waterways. 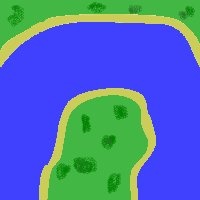 With thousands and thousands of miles of navigable rivers, the United States offers a tremendous variety of cruising options. Rivers offer many different challenges to boaters, and you need to know what to expect before you start off on your next river adventure.

Hazards that occur on rivers vary greatly depending on where you are cruising. For instance, rivers off the Chesapeake Bay may include such things as shallow waters and soft, muddy bottoms that make running aground very likely, especially if you don’t pay attention to the tide. Rivers in Maine may offer great tidal changes and submerged rocks that will do extensive damage to your boat if you happen to strike one.

Other things to watch out for are low-head dams, bridges with restricted clearances, over-head power lines, and even buoys that are submerged or moved by a fast moving current. Natural hazards include bars and shoals, submerged rocks, floating debris (which may accumulate into partial dams called "strainers") and strong tides and currents.

River bends must be handled with great care, as you often cannot see what is around the bend.

Though most boaters tend to operate their vessels in the middle of the waterway, the waters are actually deeper on the outside of river bends.

It is prudent to stay as near to the outside of the channel as you can in order to keep in the deeper water, and you will also be able to see oncoming traffic earlier - especially commercial traffic.

Using maps or following aids to navigation on lakes and rivers can be confusing at best, and very dangerous if you are not familiar with the system being used on that particular body of water.

Different agencies such as local map companies, the U.S. Corps of Engineers and NOAA, use different symbols to show the same object. Similarly, symbols may take on completely different meanings on different charts. Pay attention to the map legend to note what different symbols stand for. 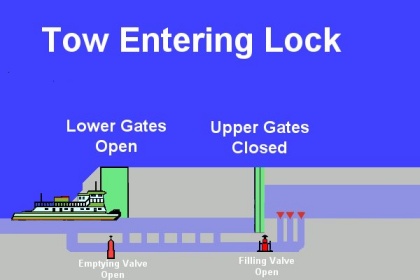 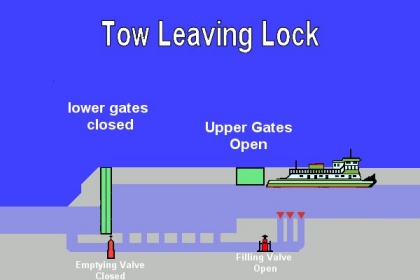 Dams also offer unique enticements and challenges to boaters. Most reservoirs and many rivers have large cruising areas that have been created by dams. Dam spillways often hold trophy-sized fish in their turbulent waters. But the dangers are real.

Low-head dams in particular hold many dangers, and while they may be fairly safe at low water, they can become death traps when water levels rise. As water tumbles over the edge of the dam, it creates a turbulent current, sometimes called a "backwash" or "boil" or "hydraulic" that can be impossible to escape should you fall into one. These hydraulics can be strong enough to even pull your boat under.

The best course of action when cruising a new area is to check your map or chart for dams, especially low-head dams, and steer clear!

Over the last one hundred years much of America’s interior has been opened to cruising boats because of canal and lock systems such as the Tenn -Tom waterway and the New York State Barge Canal. While these canal systems were formed for commercial traffic, recreational boaters now heavily use them.

Canal systems can have virtually every type of waterway that you can boat on, from narrow rivers, to wide lakes. Here are some things you need to consider on waterways with locks.

As you approach a lock, there are special rules of the road you need to follow to insure a safe and quick lock transit.

There is a strictly enforced order that vessels may enter a lock. As a pleasure craft, you will always have the lowest priority for entering a lock.

Military craft have first priority, followed by commercial passenger vessels, commercial tows, commercial fishing vessels, and finally pleasure craft. Even if you are the first to arrive, vessels with higher priority will be allowed into the lock before you.

Normally everyone on board except the captain (if the captain is not also a line handler) will be required to wear a life jacket. Have bumpers on the side of the boat next to the wall, both sides if you are tied to a raft of boats. Automobile tires are not allowed in locks, so don’t use them for fenders.

Have your crew equipped with poles to fend the boat off the walls or other boats. Turbulence, other boats and the wind can move your boat around quite a bit inside the lock. Have strong lines to tie up your boat. Many modern locks have floating bollards to tie your vessel to, but most older locks do not. Make sure your lines are long enough to reach the top of the lock.

Never use a hitch to tie up with that you cannot readily remove from a bollard as you might need to remove your lines very quickly. Better yet, have a line handler take in or pay out slack as necessary. When it is time to leave the lock, you will do so in the order that you entered the lock. Proceed at a slow speed, and enjoy your trip.