Alcohol and Boating: Drinking on Your Boat — It Really Does Matter

On a delightful Chesapeake Indian Summer day last year, a 44-year old male, a boater all his life,decided to try out a Parker 18 on the Rhode River. After a quick spin around a nearby cove and safely back at the dock, he thought it was time for a shot of vodka.

It was 10:30AM. After about 15 minutes talking boats with his friends with his friends, this very experienced boater took another quick trip in the Parker. The boat, powered by a 90-hp Honda, performed perfectly as he maneuvered around the same cove again, this time at higher speed. The operator was "getting a better feel for the boat," he said.

And although by then, as he later admitted, he was "getting a buzz on," he brought the boat back to the dock - deliberately and almost overcautiously - without incident, despite the alcohol.

That called for another drink and when he took the Parker out a third time, he "was really starting to feel the booze," as he confessed afterward.

"I was pretty confident that I could handle it but I had to concentrate hard on what I was doing," he confided to friends several days afterward. "If there were any other boats around, I didn't notice them and I never realized I'd hit that buoy. But I didn't do any real damage anyway."

Witnesses later said that when this man pulled the Parker into a slip on the cove, the port quarter hit the dock hard. The operator, now rather flustered, backed down and tried again. Once inside the slip the second time, he attempted to reverse the engine to stop but got confused. He revved the engine in forward instead and ran the bow up on the dock. Fortunately, there was no damage from this incident either.

Despite his obvious impairment level, this boater wouldn't quit. Ashore with his friends again and laughing sheepishly about the docking experience, he knocked back another vodka. By then, as tests would later show, this man's blood alcohol concentration (BAC) stood at .11%, well over Maryland's .08% for legal intoxication.Clearly, this boater was "operating under the influence." Or as Officer David Scheler of the Maryland Natural Resources Police put it - using terms any jury would have understood - "This guy was smashed."

On any other day, Officer Scheler would have taken the boater ashore, probably in handcuffs, for an accurate BAC test that would be admissible in a court of law. And this otherwise responsible boater would have drunk his way to criminal prosecution and a stiff fine. But this wasn't just any day and a boater who most people would have agreed had no business being on the water, did. That's because he was one of four BoatUS staff members who volunteered to test the influence of alcohol on their boat-handling abilities for this special "Foundation Findings."

Water Is a Poor Chaser

As more states adopt strict operating-under-the-influence (OUI) laws that mirror stepped-up alcohol enforcement on the roads, boaters are coming under increasing scrutiny. Venturing out on the water after drinking, even after moderate social drinking, can be very hazardous.

According to the U.S. Coast Guard, alcohol is a major factor in as much as 50% of all recreational boating fatalities.

The Coast Guard says a boat operator with a blood alcohol concentration above .10% - the legal threshold in 38 states - is 10 times more likely to be killed in a boating accident than a boater with zero BAC.

No matter what the activity, alcohol affects balance, vision, coordination and judgement. But in boating, stressors like wind, sun noise, motion, and vibration can magnify the effects of alcohol and even accelerate impairment.

Numerous studies have measured the effects of alcohol on motorists but comparatively little scientific study has gone into boating and alcohol. While it is possible to extrapolate data from motor vehicle research, we wanted to find out, firsthand, how alcohol would affect experienced boaters. And we also wanted to see what we could learn, at least anecdotally, from our test subjects' own recollections of their performance stacked against data collected by on-scene observers.

In this "Foundation Findings" test we designed on-water and shoreside components in cooperation with the Maryland Natural Resources Police (MNRP). The boat selected was a Parker 18 described at the beginning of this report, actually a confiscated vessel used by the marine police for undercover surveillance operations.

For the on-water segment, we put the subjects through three exercises, a slalom course at planing speed through six buoys, a steerage-speed run through six more buoys placed in a zigzag pattern, and a docking test.

For our "dock" we built a floating structure using sections of four-inch plastic pipe configured as a single-loaded slip. The dock, anchored adjacent to the test course, measured 10 feet wide by 20 feet long. A MNRP vessel patrolled outside the cove the entire time to prevent other boats from straying into the test area. For our test subjects we selected two men and two women.

We gave our test subjects a choice of vodka or rum, both 80 proof, straight or with water. A "drink" measured 1oz. To maintain a constant evaluation basis we adhered to a strict time schedule, waiting 15 minutes after each drink to get into the bloodstream.

Each test sequence started on shore with a breath meter reading to establish blood alcohol concentration, and three Field Sobriety Tests commonly used in law enforcement, all administered by the marine patrol officers. These consisted of walking a straight line nine paces and walking back, standing on one foot while counting to 30 and the Horizontal Gaze Nystagmus test. In this test the subject is asked to focus on the movement of a pen or some other subject held just above eye level. Involuntary eye movements indicate some level of impairment and failure on any of these tests gives a law enforcement officer "probable cause" to detain the person. 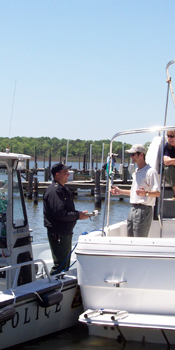 Finally, each subject navigated the on-water course under the supervision of an officer who commanded the boat between the dock and control buoys marking the beginning and the end of the course. Test subjects took the helm at the first control buoy although the officer held an engine kill switch at all times. Afterward, the officer recorded operator performance (see graph), as well as observations on each subject's behavior.

For safety reasons, as well as to record data, we assigned a "buddy" to each test subject. Their job was to ensure that the subject ran through the test sequences in the proper order and time allotted as well as to keep them out of harm's way. All parties wore life jackets at all times.

After one drink, the BAC of our subjects, all of different body types, ranged form .02% to .05%. Three of the four failed the eye exercise in the field sobriety test, indicating that some people show signs of impairment well before legal intoxication. All subjects performed adequately on the water although two maintained slightly erratic control over boat speed. And the same two hit the dock.

With a second round of drinks under their life jackets - two subjects had to have doubles for the alcohol to keep up with their metabolism - BAC ranged from .05% to .10%. This time all four did poorly on the field sobriety tests yet each appeared more relaxed and confident in the on-water test.

Following the third round of drinks (a total of four to five ounces, depending on the subject), BAC ranged from .08% to .12% and the field sobriety test showed that each was clearly inebriated. Officer Scheler recorded that the subjects varied boat speed greatly this time, taking very wide turns and overcompensating on the helm. Again, two hit the dock and one hit a buoy.

Performance in all categories after the fourth round of drinks proved far worse. At this point, two subjects had to be removed. The two remaining, a male and a female, had both reached nearly .15% BAC by that time, nearly twice the legal threshold in 17 states. They got through the on-water course, but with great difficulty, proving only that some boaters can physically manage to take a boat out on the water, even at that level of intoxication. In reality, they would be a serious threat to other boaters, their passengers, and themselves.

In the cold light of a later day, the test subjects and their observer "buddies" gathered for a debriefing. Each observer noted that the level of mental concentration the subjects needed in order to compensate for the effects of alcohol increased markedly throughout the day.

Each subject also noted that he or she began to loose track of activities around them as BAC rose, at least until they neared intoxication. This was very obvious to the observers. Interestingly, two subjects recalled being aware that their peripheral vision suffered as BAC rose, too. At or beyond legal intoxication level, however, they were neither very aware nor concerned about activities around them.

Observers also noted that as the day went on, the subjects paid less attention to details like having their life jackets fastened properly or whether their assigned buddy was with them.

Each subject noted that even at moderate BAC levels, any unforeseen situations would have created problems for them in operating the boat. Any variable - obstacle in the water, approaching vessel, man overboard - that would have required a quick decision or spontaneous reaction could have had dire consequences.

Most subjects agreed that the lag time "before the alcohol hits you" can produce a false sense of security that could lull a boater into drinking too much in too short a period.

Most boaters think of collisions as the greatest threat when drinking on the water. Yet, according to BoatUS Foundation for Boating Safety research, an estimated 75% of alcohol-related boating accidents and injuries do not involve collisions. In fact, falls on board or overboard, or missteps at the dock or getting into the dinghy, are a much greater threat when drinking afloat.

It is more important to note that the subjects in our test were boaters who do not drink when operating their own boats. Of course, they knew this was a test and that quite naturally prompted them to concentrate harder on activities than a boater who may assume it is okay to drink and operate a boat or one who doesn't think twice about doing it.

In addition, this test was conducted under ideal, controlled conditions, conditions that the average boater will seldom encounter on the water.

With most of our "Foundations Findings" tests, we advise you to try the products yourself. However, when it comes to alcohol and boating, we ask you to take our word for it.

This "Foundation Findings" could not have been conducted without the assistance of the Maryland Natural Resources Police. The on-site team headed by Sgt. Wayne Jones, Community Relations Coordinator, provided not only supervision and field sobriety testing, but a wealth of real-world information about the effects of alcohol.

Special thanks also go out to Cpl. Wayne Avery, Cpl. Steve Jones, Off. David Scheler, and Off. Brian Noon of the Southern Region Marine Patrol. Their experience, professionalism and good humor turned a long, demanding day into a very worthwhile learning experience for everyone involved. 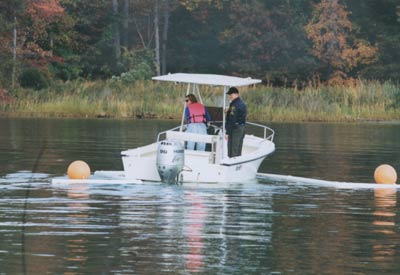 Foundation Findings: Drinking on Your Boat - It Really Does Matter 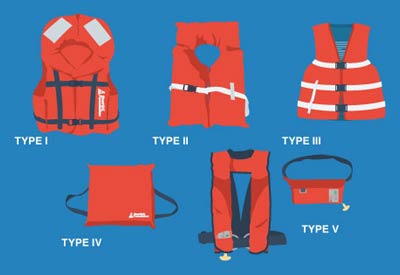