It's a balmy summer day and you've anchored in your favorite cove.

Suddenly, a large boat speeds by too closely and throws out a large wake. Caught off guard, you try to gain your footing on a rolling and slippery surface. With this scenario in mind, the BoatUS Foundation for Boating Safety set out to determine what sort of deck surface would provide the best traction under wet and dry conditions.

The foundation recently tested seven types of non-skid surfaces that can be applied to decks, cockpits, cabins, galleys, and engine rooms to increase traction and prevent slips and falls. We were able to purchase most of these items at our local marine retailer. These products were chosen for their wide range of recommended applications. For example, while one product may work well in an engine room, it is not designed for use on a foredeck. Our logic in choosing such a variety was that you never know where you might be standing when your boat suddenly and unexpectedly rolls.

We tested two pain mixtures. Interlux 2398 Polymeric Nonskid Compound and Monster Grip Epoxy Non-Skid Safety Coating. While the eight-ounce can of the Interlux compound works as an additive to your deck enamel, Monster grip is a paint containing a grit-like substance. Additional one-ounce containers of Monster Grit, sand-like particles, are available if you desire increased traction. These two products are suitable for application to exterior surfaces like decks, cockpits and steps, and can be painted over fiberglass, wood steel, and aluminum. We applied both of these products to finely sanded wood.

Vynagrip is a heavy duty, open grid PVC flooring that is sold in rolls of four, six, and eight foot lengths, all 36 inches wide. A series of deep cut diamond treads on top and bottom helps it bond to the surface to which it is applied. Deck Mate is sold in a package of four 12-inch, interlocking tiles. The tiles feature a checkerboard pattern with a series of oval raised bumps. Additional edge pieces are available for a better fit, or you can cut the tiles to suit your space. Both of these products need to be laid down in places where they fit snugly. Thus, they are not recommended for use on an open deck, but will work well in cockpits, cabins and lockers. They are especially suitable for galleys and engine rooms because both resist chemical, gas, and oil spills.

Next, we chose marine grade indoor outdoor carpeting which is most suitable for use in a cabin or a semi-enclosed deck. We also tested a piece of teak since this is a common deck surface. The teak did not have any non-skid compounds previously applied. Finally, we tested a product called Treadmaster Original M, a non-skid sheet that can be cut and applied to almost any deck area. Treadmaster has a series of triangular raised bumps and is 7/64 inches thick. Epoxy will bond Treadmaster to your deck, and you can lay it down in sheets or cut it to fit odd shaped areas.

We also considered testing pieces of fiberglass boat decking in which anti skid patterns are already molded. However, we quickly discovered that the variety of patterns used by boat builders was enormous, making it irrelevant to test one of literally hundreds of patterns. See the table below for a comparison of the features of the products tested.

We conducted two sets of laboratory tests for traction followed by a more subjective hands-on test for safety and comfort. Working with the University of Virginia Mechanical Engineering School, we created an elevated surface using a standard folding table, a scissor jack, and a wooden, elevated platform that held the test products in place. The wooden platform sat atop the table. One end of the table top rested on the scissor jack ( with the table leg folded under), and the other end sat in a small wading pool. We completed two sets of tests on this platform, one in which the products were dry and one in which they were wet. For the wet tests, we filled the wading pool and used a pump to lift the water from the pool to the top of the test surface.

Once the test was secured to the platform, we made sure that the surface was completely flat. A shoe was placed at the top of the platform and was checked to make sure it didn't slide. The scissor jack was set in motion, elevating the platform. Cranking was stopped when the shoe began to slip. We used 4 shoes including a brand new Topsider, an older pair of deck shoes, and two sneakers featuring different tread patterns. We did not weight the shoes because of difficulties in finding an ergonomically correct method. Further, the participant testing served as a more accurate measure of the effects of weight because of the ways in which people tend to shift their weight when standing on an angled surface.

We then had 11 participants rate the products for overall traction and comfort on a scale of one to seven, with one being the best. The participants, wearing a variety of deck and sneaker style shoes, stood on the surfaces, which were elevated, to test traction. These tests were done under both wet and dry conditions, Then, they stood on all of the products in their bare feet to determine comfort. Treadmaster received the highest overall rating in this round of tests. However, while the participants felt Treadmaster provided excellent traction, they generally made negative comments about its comfort on the bare feet.

See the table below for results of laboratory traction tests and subjective ratings.

We were initially impressed with Monster Grip. It outperformed all the other products in the run of dry tests. Although the surface was somewhat rough and gritty, it seemed to provide excellent traction - but we quickly developed serious concerns about its performance under wet conditions. The manufacturer's advice on the can is to avoid applying Monster Grip to areas that experience continuous standing water. They also say to keep your surface dry for two weeks following application. We found that even small amounts of water affected the performance of this product. Once we got the Monster Grip wet, it flaked off easily after only light abrasion with our hands. This would pose serious safety and cosmetic problems if applied to any open deck. On participant even stated that Monster Grip came off on her shoes. Another consideration is rainwater, especially if your boat is left uncovered and exposed on a regular basis. Finally, Monster Grip has an especially gritty feel that is uncomfortable on bare feet, hands, and knees.

While Interlux consistently tested fifth in terms of traction, its versatility and suitability to the marine environment give it higher marks in our book. We added the compound to our deck enamel per the manufacturer's recommendation of four ounces of compound per quart of enamel, but adding more of the compound might have increased traction. Unlike Monster Grip, Interlux is designed and formulated for use under wet conditions. Further, the Interlux was more comfortable on bare feet as is features a regular spherical shape that is far less gritty. Finally, it is inexpensive as an additive and gives you the option of controlling the amount of skid resistance.

Because of Vynagrip's open-grid pattern, we ran tests both with and against the grain. As expected, the shoes slid on a lesser angle when going with the grain, and sat on a slightly higher angle before sliding against the grain. For our final calculations, we took an average of both tests. We had mixed results on Vynagrip's anti-skid abilities. While it came in first in our series of wet tests, our participants did not feel secure when standing on the mat and felt it was slippery, especially when standing with the grain. Almost all participants stated that it was not comfortable on bare feet.

While Deck Mate did not fare as well in the traction tests, we feel it is a good product for certain applications. Because of its design, it keeps water away from any items you might rest on it, making it great for lockers. Its resistance to gas, oil, chemicals, and dirt makes it suitable for engine rooms and galleys. It also cleans up easily - just hose it down and the water will run underneath. Because of its thickness, it is a little more difficult to cut. Our participants were mixed on comfort. While some felt the rubbery material was comfortable on bare feet because it tends to give under pressure, others felt the grooves were uncomfortable, and suggested it would be possible to get your toes caught. This surface is very uncomfortable when kneeling. Deck Mate is available in 11 colors.

This product tested at the top in terms of traction by our participants and came in third in the overall rankings. The real advantage to Treadmaster is that it can be applied to almost any area of your boat. Treadmaster is also designed to resist gas and oil. Of all the products tested, Treadmaster is the most versatile and this, combined with its skid resistant qualities, makes it an excellent choice.

Almost every participant gave the teak low marks for traction. However, it is well known that teak wood has provided excellent traction to boaters over the years. It is a common surface on foredecks and in cockpits, potentially the most slippery areas on any boat. The teak did, however, receive higher marks for comfort than most of the mat-like surfaces we tested. Teak is an aesthetic choice for many boaters and many would hesitate to cover teak with another skid resistant product.

Overall, the carpet tested well in terms of traction. This was not a surprise given the density of the carpet fibers, which is a weave of three bulked continuous filament yarns. However, the carpet has limited applications, and is better suited for enclosed or semi-enclosed cabins where it won't get wet very often. The carpet takes longer to dry than our other products, and may be more difficult to clean. It has been treated for mildew and rot resistance, and the manufacturer recommends a non-waterbase adhesive.

While we compared these seven products for skid resistance, many additional features of these products also affected their performance. Treadmaster wins high marks for its combination of excellent skid resistance, comfort and versatility of application. Monster Grip's drastic difference in dry and wet conditions indicates that this product is potentially unsafe in the marine environment. Whatever you choose to apply to your boat to increase traction will be largely based on the surface area you need to cover.

In 1994, 26% of all boating fatalities were the direct result of falls overboard. While these products will all provide some level of increased traction, there are common sense measures you can take to prevent slips and falls. A good rule to follow, especially when walking on an open deck, is one hand for your and one hand for the boat. 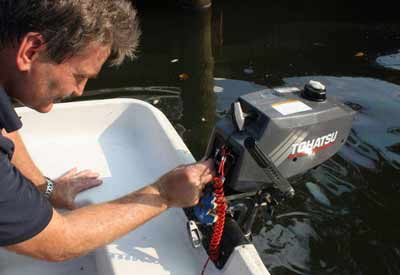 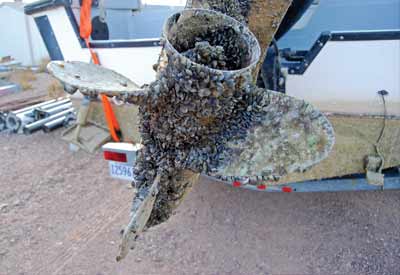 Invasive Species: Learn about wildlife that can harm your engine and equipment.