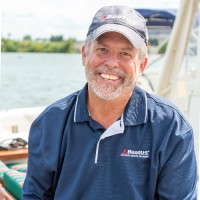 BEAUFORT, N.C., July 6, 2020 – The Town of Beaufort and the adjacent Rachel Carson Reserve knew they had a problem with abandoned vessels. For years, a pristine set of barrier islands had become an illegal dumping ground for old boats, tires and other debris. Local on-water boat towing and assistance company TowBoatUS Beaufort not only wanted to help remove the mess, but owner Capt. Lee Sykes offered to help foot the bill with a matching donation with in-kind services. With some guidance from BoatUS Foundation for Boating Safety and Clean Water, the large-scale marine debris removal project was selected for a NOAA Marine Debris Program grant that paid $68,000 of the recently completed project’s $175,000 cost.

“This project showed how local organizers can reach out within the community and find various stakeholders that had unique talents and skill sets to take an idea and make it a viable project,” said Capt. Sykes. “When the Reserve came to me and wanted me to get involved with this project, I said not only are we going to get involved on the operations side, but we’re going to get involved on the money side, too. We matched a lot of money to help pull this off because it was a large project.” A video on the project is available here.

Removal of the debris, which included more than 43 illegal and abandoned moorings, 11 vessels and more than 62 tons of debris, took several weeks. Added Sykes, “We were all saddened by the debris. Once one or two wrecks were dumped, others followed. A handful were from Hurricane Florence. Transient vessels were having difficulty anchoring and often struck unmarked submerged objects. With downtown just on the other side of the channel, it was an eyesore to everyone.” The TowBoatUS Beaufort crew hauled all of the debris ashore where the wrecks were scoured for recyclables and hazardous materials, then sent to landfills.

For more information on marine debris and what you can do to prevent it, the project partners created a short video. The BoatUS Foundation has also worked with other local TowBoatUS on-water towing companies for NOAA Marine Debris projects in Ohio and Maryland, and contributed to education and outreach on the Beaufort project.